The episodes are licensed to over 80 PEG television stations – and airing in over half million U.S. households.

The chef cooks up healthy dishes such as Shrimp Scampi, as well as healthy versions of chocolate desserts.

Sixteen (16) episodes have been produced by Michelle Valentine Media, LLC.

If your station would like to air any of the “Healthy Cooking” 5 minute recipes, contact us regarding licensing individual episodes – or the full 16-episode series.

Michelle Valentine, B.A. Psychology, is the World's #1 Dating & Relationship Advice Expert and Professional Matchmaker. She provides personal advice through phone & email sessions and creates courses & books for individuals seeking help with dating or with their current relationship. She is also the Book Author of "How to Find Love Online", Newspaper Advice Columnist of "Dear Michelle Valentine", and TV Host of the "Michelle Valentine Show", a nationally-airing dating & relationships TV talk show. For those desiring to become a Matchmaker like her, she offers "Michelle Valentine's Matchmaking Academy". She lives happily-ever-after with her husband in sunny Florida, with an oceanfront home and enjoys watching dolphins and romantic sunsets! 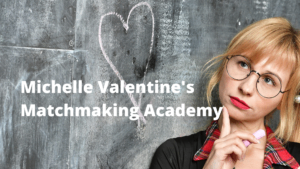