In the center of Rome, the capital of Italy, to the south of Piazza Venezia, there is a ruined outer wall, which is the famous attraction – the Colosseum.

This was on my top of things to see in the world, and I was enthralled to visit this historical location!

The Colosseum, built 2,000 years ago for the barbaric slaveowners, stands dilapidated in the prosperous city center, and still whispers its heart-heavy history to passers-by.

In 72 A.D., ordered by Emperor Vespasian, the Colosseum was built to please victorious generals and celebrate the greatness of the Roman empire. Completed during the reign of Vespasian’s son Titus, it became one of the landmarks of the ancient Roman Empire.

However, the Colosseum was badly damaged in a fire in 217 A.D.

The Colosseum was the place where people and animals performed: gladiators fought with a wild animal until one of them died.

According to the Roman historian Dio Cassius, when the Colosseum was built, the Romans held a 100-day celebration in which 9,000 animals were slaughtered. 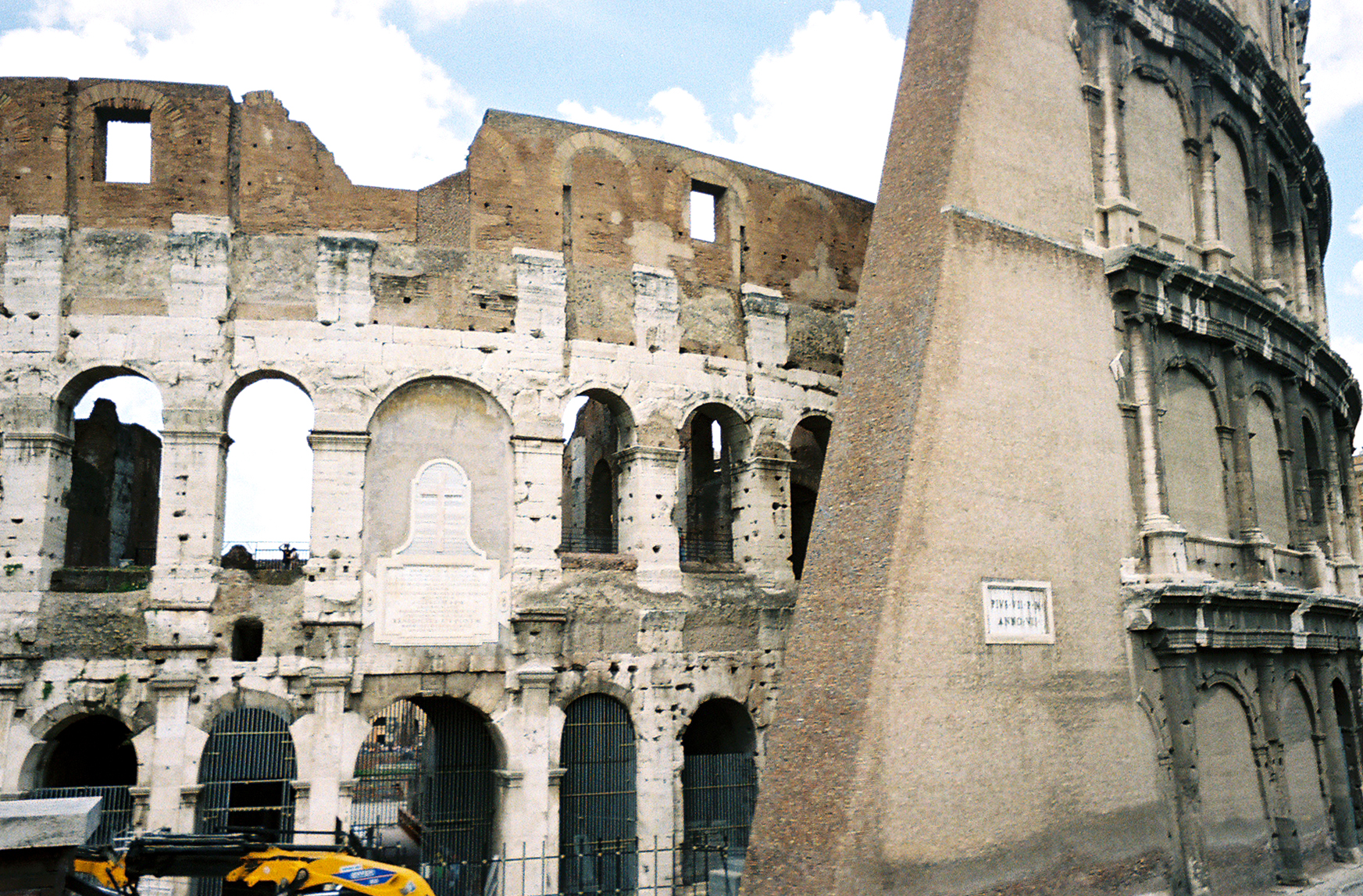 In appearance, it is an almost perfect circle shape, but when viewed from above, it is oval in shape. It covers an area of about 215278 square feet, and it is about 610-feet long by 511-feet wide. The circumference is about 1729 feet, and the height of the wall is about 187 feet. This huge building can accommodate nearly 80,000 spectators.

The Colosseum is divided into several levels and used in ancient Rome to distinguish between different spectators. Now, it also gives viewers a different view of the entire Colosseum.

In ancient times, the grandstand consisted of about 60 rows and was divided into five sections. 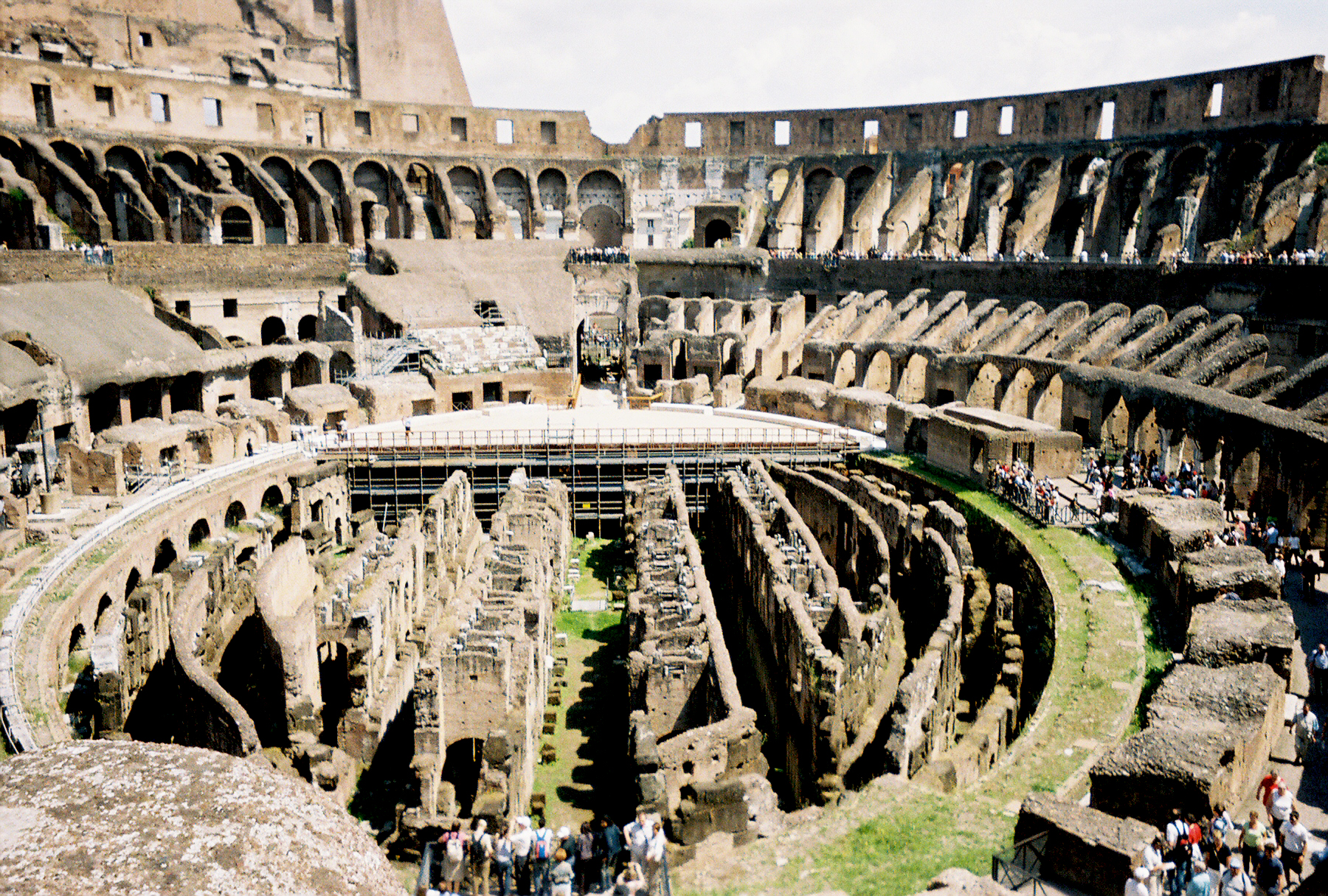 You will have different views based on different sections you stand.

Standing where gladiators fought against animals, you to understand the cruel history stories that happened between gladiators and animals.

You can walk through the underground tunnels, to feel the gladiators’ last piece of peace in the darkness from 2,000 years ago. After all, the moment they saw the light was not always the hope for life, maybe death.

You can also see the enclosures where lions were kept, to sigh those kings of the beasts that initially belong to the prairie, who became the slaves of people for having fun.

Don’t forget to enjoy the panoramic view from the top tier. You may want to praise the masterwork of architecture.

But you may need to sign up for a tour that will give you a more professional guide of its past.

The Arch of Constantine

The Arch of Constantine, a gateway to the triumphant return of armies, stands next to the Colosseum. It was completed and inaugurated in 1836 and now is the largest arch in the world.

Moreover, there are gates around the arch with the names of 386 generals and 96 victories following Napoleon’s expedition, and the French wars’ history from 1792 to 1815.

Here was my view from the Colosseum:

Weather in summer: It is super-hot in town, so dress for full sun and heat!

Always check the weather before going there, though.

Bring something to cover with if it rains.

Banks open from Monday to Friday.

If you like shopping or want to buy something there, check the hours always. Shops are generally open from 10 a.m. to 1 p.m. and 4 p.m. to 8 p.m. from Monday to Saturday.

I loved all the souvenir shops!

I bought a white t-shirt with the saying, “I love (as a big red heart) Rome”.